Written by Sultan Hassan on 16th March 2018. Posted in Blog

Also known as otoplasty, prominent ear correction is a cosmetic procedure for resizing and reshaping the structure of an ear. Adults and children who have deformed ears that protrude too much from the head often become overly conscious about their appearance, and many of them elect to undergo ear correction surgery. Are you interested in doing the same? Then you need to do your research on this procedure, so you can arrive at a more informed decision.

What are prominent ears?

Ears that appear to be sticking out 2cm from the head are called prominent or protruding ears. Some people are born with this deformity, but it may also develop as a person grows up. Doctors say that the reason for prominent ears is an underdeveloped anti helical fold, which causes the outer rim of the ear, called helix, to stick out. A deep concha can also make ears appear bowl-shaped. Despite their appearance, prominent ears are no different with normal-looking ears, so hearing is not a problem. 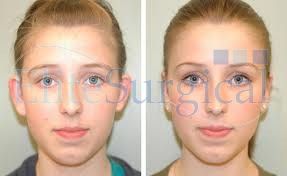 Is there a way to prevent prominent ears?

Preventive measures can be done as early as 6 months of age. The traditional methods are bandaging and taping of ears, but today, you can use ear splints. However, it is only recommended for babies under 6 months since their ear cartilage are still soft.

Kids aged 5 and above, as well as adults can undergo prominent ear correction. The procedure is simple and less intrusive compared to other types of cosmetic surgery. The doctor either injects general or local anaesthetic during the treatment, which only lasts about two hours. Making a small incision behind the ear, the doctor will reshape the structure of the ear back. The ears and the head will be wrapped using a bandage after the surgery, and this must be kept for at least a week.

New methods have been developed to make ear correction surgery and recovery faster, such as the Earfold technique. This procedure is done within 30 minutes and does not require bandaging.