Written by Sultan Hassan on 15th April 2016. Posted in News

Kyle Christie from MTV’s Geordie Shore tells The Daily Mail why he decided to have nose job/rhinoplasty by Elite Surgical’s lead cosmetic surgeon, Mr Sultan Hassan. Kyle chose Mr Hassan who also operated on other stars from the cast of hit MTV Show Geordie Shore including Charlotte Crosby, Holly Hagan, Marnie Simpson and Sophie Kasei. Click below to read all about it. Kyle decided that after many years of being unhappy with the shape of his nose he would do something about it. He chose to ask Elite Surgical’s award winning celebrity cosmetic/plastic surgeon Mr Sultan Hassan to perform his rhinoplasty at our partner hospital, The West Midlands Hospital near Birmingham which is part of Ramsay Healthcare. Kyle tells Claire Farmer of Mailonline why he decided to undergo surgery. 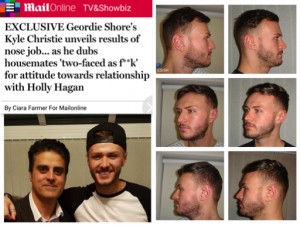